Last night upon a miracle sent only from God, Erik was able to take Saturday night off! HNOt eh whole day of course; he worked the AM instead so that he and I could go to a wedding. The general manager of Perry St was married in a beautiful part of Roslyn on Long Island. Everything was beautiful and the chef even danced with me. I know how hard it was for him to get up and boogie so I'm super grateful for that. To understand my stress we have to go back in time exactly one week. 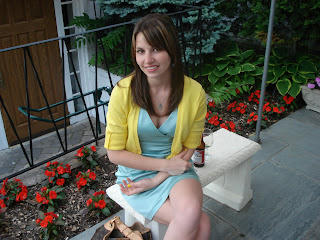 Last weekend I asked Erik if he had clothes to wear to the wedding. He has a suit, but it's old and the jacket isn't fitted that well. He has some old ties rumpled in a shoebox somewhere. My chef doesn't ever have a need for a suit so we keep putting off buying a new one. Back to last week. When I asked Erik if he needed anything he said, "I'll figure something out." Well Friday came and he realized he needed a formal shirt and a new tie. So since Erik was working and I had off, I went to Macy's and wandered around the men's department. I like shopping with Erik; I know his style and what he's comfortable with. But shopping without Erik in a section of the store I've never been to was a nightmare! I was surrounded by all these starched shirts in bags and what felt like 700 ties in various colors and patterns. I finally decided on a blue shirt with a white collar and a yellow tie.
Well, boy was I wrong. Erik got home Friday night and tried everything on. After removing a dozen pins from the shirt and adjusting the tie we realized the shirt needed cuff links. We don't have any of those! Plus the shirt was too big in the neck and he didn't like the style-"too formal". He ended up wearing a pin stripe blazer and a button up shirt with an embroidered pattern on the sleeve and front. No tie. He was a little self conscience about not wearing a tie, but I thought he looked great. However, the problem of the suit still exhists. But now, we really have no reason to buy one until someone else gets married. Actually, we are going to Jean Georges on Monday for his birthday and I'm pretty sure a jacket is required. I have a feeling he'll be wearing the same thing. I don't mind as long as I don't have to go shoping by myself again. 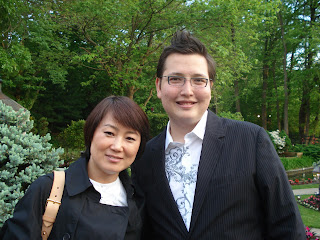 Is my chef the only chef who has a severe lack of formal wear? I can't believe that's so. Most chefs never have time to go to events that require a tie. So what happens when they do?
Food is Love,
Hilary

Oooh goodness, Hilary! When I read this, I rolled my eyes. I JUST went through my Chef's closet, as we're moving and I was packing up his things. Any "formal-ish" items (including plain old slacks and casual button-downs) are at least 8-10 years old and literally covered in dust! Ugh, the button-downs were lopsided on their WIRE (!!??) hangers with the collars smushed and bent -- and many of the shirts were so faded it would be inappropriate to even wear them..! He did let me throw most of it out, surprisingly enough -- and I think he'll allow us to shop for one or two new outfits that will last him a while (now that I'm around to take care of them!)

Suit jacket which came with pants. Should not be worn with different pants. A dress does not look good without a shirt and tie jacket.