It has been two years this month that I started The Desperate Chefs' Wives blog and I am so pleased with where it has taken me. I used to be such a grouchy, angry chefwife and I thought my life was something terrible. Well, after meeting other women who have the same life I realized that I can either be miserable or create a new normal. My new normal is that my husband works nights, weekends, and holidays and that's it. Period. I've accepted it. BUT. I'm still not perfect.

My husband's sous chef is taking two weeks off in July to get married. So Erik has to work 17 doubles in a row-no weekends. I'm so livid with this whole situation. I'm angry that there is no one else who can help my husband at the restaurant and I'm annoyed that I have to deal with an overworked-underpaid chef for 17 days in a row.

Last night, Erik was asking me why can't I just be supportive, like I usually am? I don't know. Perhaps it's because I'm not perfect. I can only smile so much, blog so many times, spend time alone so many nights before it all catches up to me. Erik might as well be on another planet for 17 days because there is no way I'll ever see him. He'll leave every day at 9 and get home at 1 AM or later. On top of that, I only work part-time at the school in the summer so I don't have many work things to occupy my time. I just don't think I'm going to be able to handle it this time.

Where am I? Am I blending whipped cream?

I need nice, soft peaks for this whipped cream.

Food Inc, How Industrial Food is Making us Sicker, Fatter, and Poorer-And What You Can Do About It!
I saw Food Inc tonight and it was one of the most powerful movies I've ever seen. I can honestly say it has already changed my life. I went grocery shopping immediately after leaving the theatre and the purchases I made reflected my new outlook on food. I only bought in season produce, no hormone and no antibiotic milk, and I checked to see where products came from. (the closer the better)

I highly recommend this film to anyone who does the following activities:

Seriously, folks I can't push this film hard enough on you. There are so many thing hidden from the general public about food and food safety and its time we all see the truth. It's too bad that Obama is out fixing the world from the economic crisis, otherwise he could focus his energies on trust busting the major food companies that dictate the food industry.

I could preach all day, but the movie will do a much better job. Get out there and see it, you won't regret it. The tomatometer on Rotten Tomatoes shows Food Inc. at 96%. And no, this movie doesn't show more than a couple graphic slaughterhouse scenes. It won't change you into a vegetarian either, but this movie will make you a more informed shopper. I didn't know how ignorant I was to the origins of my chicken breasts or batteries.

Check out the blog: Hungry for Change

Click here to see if the movie is playing near you.

Days Off or Off Days

Sundays are great. The chef and I both relax, eat out, go for walks, and whatever else we feel up to. But Mondays, rainy days and Mondays always get me down. I love coming home from work and seeing Erik actually spending an evening with my husband. But since he spends Mondays sleeping off the week the second I get in the door he wants to go out. I need a couple minutes to check emails, change, and SIT DOWN. I know he wants me to be excited and ready to take on the world, but I just can't. But I guess it's no big deal since I don't work Mondays during the summer. Two days in a row from now until September, like a normal people.

Did we have a cheese sandwich making contest last night?

YES! We both made cheese sandwiches.


The sad part about this conversation is that the chef was awake. I can't wait to find the results of this sleep test Sunday. On the information packet we had to fill out there was a section to mark things that happen in the night. "Talking during sleeping" was checked off faster than anything else.

I know there are misconceptions out there about the glamorous lives of chefs, but I've had another first hand experience with someone thinking my husband is some sort of "perfect husband". Spare me.

Erik needs to take a sleep test this week and the woman at the sleep center who is setting everything up for us is so sweet. At first she only said, "I'm sure your husband won't even eat the free breakfast we offer, since he's a chef". Free breakfast? He'll take two! Then last night when Erik was talking to her she joked that the only reason I was staying overnight with Erik was so that I could make sure no one would steal my chefhusband. I'm actually going for moral support, but she's one of the many who see an alluring lifestyle that chefs lead. And to be completely honest with you, I fall victim to it as well.

Although I know first hand of the non-classy and non-exciting parts of being married to a chef I seem to think that the big wig chefs like Jean-Georges Vongerichten, Thomas Keller, and the like have incredibly desirable lives all equipped with long vacations on French beaches and smart parties on yachts. I suppose the grass always seems greener even when you know first hand that it's not.

Email ThisBlogThis!Share to TwitterShare to FacebookShare to Pinterest
Labels: chef and wife

A well known chef recently told me that his daughter only eats food that is white in color. I know how picky kids can be, but how do chefs react to that? Do your chefhusbands cook kid -friendly meals like PB & J and mac and cheese or are your children exposed to premium cuts of beef, caviar, and oysters? I don't know how Erik will cook for our children someday. He'll probably cook normal kid food but also expose them to a new and exotic foods.
Food is Love
Hilary
7 comments: 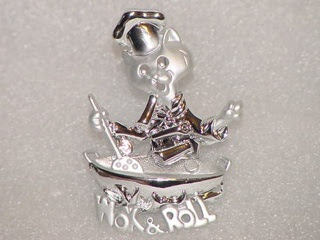 I'm not much a pin wearer, but for the sake of humor, I'd boast this bad boy on my lapel.
Food is Love,
Hilary
No comments:

When I was in college I read Fast Food Nation for my political science class and I became a vegetarian immediately after finishing the last pages of the book. I wrote at least three term papers on the deceitful nature of the fast food industry and its negative impacts on children. My altered diet lasted only one year, and the Peta stickers faded off my car, but the loathing of all things fast food seemed to burn into my brain. I do love fast food though- it tastes great-but I hate the way the big companies brainwash people into believing certain things are healthy, or even edible!

Tony Bordain wrote Kitchen Confidential giving a clear view into the underbelly of NYC's culinary industry and Eric Schlosser's Fast Food Nation did the same for the fast food industry. After reading that book you'll think twice about fast food. Not only will it shock and disgust you but the history of fast food is charming one that eventually turned rancid. Fast Food Nation was made into a movie that Hollywood ruined with cheesy characters and a love interest. It should have been a documentary. Michael Moore would have been great at that.

Writer Eric Schlosser must have been disappointed in the movie too since he's been working collaboratively on another film: Food, Inc. "Filmmaker Robert Kenner lifts the veil on our nation's food industry, exposing the highly mechanized underbelly that's been hidden from the American consumer with the consent of our government's regulatory agencies, USDA and FDA. Our nation's food supply is now controlled by a handful of corporations that often put profit ahead of consumer health, the livelihood of the American farmer, the safety of workers and our own environment. We have bigger-breasted chickens, the perfect pork chop, insecticide-resistant soybean seeds, even tomatoes that won't go bad, but we also have new strains of e coli--the harmful bacteria that cause illness for an estimated 73,000 Americans annually. We are riddled with widespread obesity, particularly among children, and an epidemic level of diabetes among adults Featuring interviews with such experts as Eric Schlosser (Fast Food Nation), Michael Pollan (The Omnivore's Dilemma) along with forward thinking social entrepreneurs like Stonyfield Farms' Gary Hirschberg and
Polyface Farms' Joe Salatin, "Food, Inc." reveals surprising--and often shocking truths--about what we eat, how it's produced, who we have become as a nation and where we are going from here. "

Care to read the book before you see the movie?

Food, Inc. opens in LA and NYC on June 12. For tickets visit MovieTickets.com.

Just from watching the trailer I'm convinced. I'll be making some serious changes at the grocery store. And I hope this movie changes the way other people shop for food. We do have the power to change the large companies; each item we buy at the store is a vote. What will you vote for? 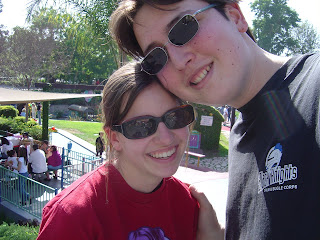 If I only knew back then...

A reader recently asked me if I could do everything over again would I run? As in run from the my chef like she's tempted to do now knowing what we all know. There is no way I would ever change anything. It would take all the powers in the world to tear me away from my perfectly imperfect life. I can't stand the time my chef is away at work, but it's the life I lead and I'm not going anywhere. A life with a 9-5 husband would certainly lend to more quality time, but there would be other problems. There always is. I believe we are challenged each day in life only enough that we can handle it while still learning something at the same time. I'm challenged everyday, any more than this and I'd be done for, any less and my life would be boring. 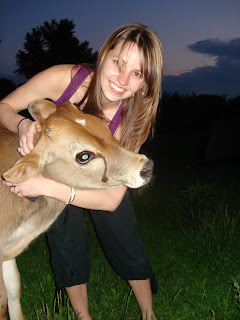 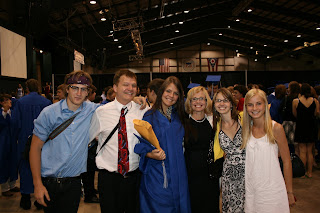 Chris, David, Christina, Camar, Me, Cosette
I wish I could have been writing more this weekend, but I'm in Ohio right now celebrating my sister's high school graduation. Only one more sibling to graduate! We celebrated down on our Uncle's farm where our cousin, James also graduated. I'm flying home tonight and I can't wait because even a few days without my chef seems like forever. I'll be blogging soon again, I promise!
Food is Love,
Hilary
1 comment: