Not, not a sprint towards the nearest Olive Garden -it's the NYC Marathon-powered by Barilla pasta. I always heard that carbs were good before a long workout-and there's no workout like a 26.2 mile run through New York City. Barilla pasta has provided a pasta dinner for 15,000 runners for the past 5 years. You know Barilla, they are the pasta company with those absolutely romantic commercials set in well decorated apartments and villas. On Saturday night 7,000 pounds of pasta will be cooked up and served at Tavern on the Green in Central Park. Lorenzo Boni, executive chef of Barilla Pasta will be heading the event preparing Barilla Tri Color Rotini Pasta, Barilla Cellentani with Artichokes,and Baked Barilla Piccolini® Mini Ziti with Roasted Vegetables and Ricotta Cheese. Lorenzo is a true Italian too, raised in Bologna, Italy and trained all over the country.

The dinner will begin at 4:30 PM on Saturday, October 31 and tickets are on sale for runners as well as the general public for $25. They can be purchased starting today at the Jacob Javits Convention Center. So if you're not into dressing up like Jon and Kate Gosselin or dancing to the Monster Mash this year, head on over to Tavern on the Green for some delicious pasta dishes.

Good luck to all the runners!

Food is Love,
Hilary
No comments: 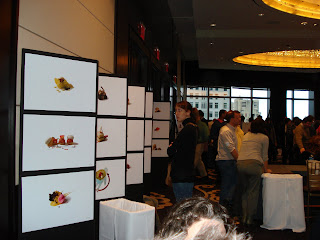 Alan Batt, aka Battman released his latest two books today at the Mandarin Oriental hotel in NYC. The Great Gathering of Chefs was just that having chefs from all over sign 100 copies of the books Small Things Savory and Small Things Sweet. They feature stunning photography and recipes from some of the greatest chefs and restaurants in the city. Such notables included Greg Brainin from Jean-Georges, Craig Koketsu from Park Avenue Winter, George Mendes from Aldea, and my husband, Erik representing Perry Street. 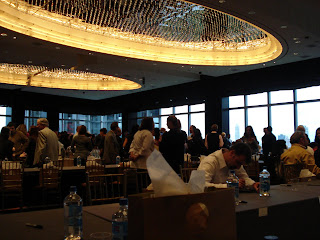 The event raised money for Action Against Hunger, an agency designed specifically to battle global hunger. Al Gore is working with the organization to create another documentary, No Hunger. Visit AskAlGore.org for more information. 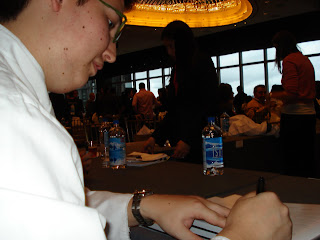 Since Erik is working for BLT currently, but signed books next to his Perry St photo, he was lucky enough to sit with his BLT coworkers. There was even an seat empty next to Erik so I helped pass the books along the signing assembly line. That is of course after I got a taste of a duck hot dog from the d'artagnan station. I'm in love with duck hot dogs now. MMM 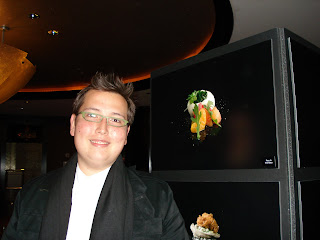 Email ThisBlogThis!Share to TwitterShare to FacebookShare to Pinterest
Labels: Alan Batt, The Great Gathering of Chefs

I was sent a couple more packages from the folks at POM Wonderful. The first one was a new iced coffee drink. No, no, no, it doesn't taste like pomegranate. But like their line of pomegranate juices, it has tons of antioxidants,not to mention hormone free milk, organic sugar cane, and no preservatives. Since I'm preggers I can't really drink the stuff but Erik was more than willing to test out the new drinks. Those adorable bulbous containers really pack a punch. Erik was caffeinated after finishing and also like drinking it. I took a little taste too of the chocolate flavor and it didn't taste like it was mixed with a "chocolate" concoction, but real milk chocolate. Tasty.

The second package POM sent was two new juice flavors. It was the regular pomegranate juice with nectarine and kiwi flavors added. I definitely liked drinking them, again in those adorable bulbous containers. But I think I like the original pomegranate better. However, if the pure pomegranate juice is a bit too strong for you, then the kiwi or nectarine is perfect. It doesn't taste watered down, just less strong.

No matter what they put out, I just love the POM line of drinks.

The Chef is Back

Finally!! Erik came home last Sunday and I've been just elated ever since. We went to dinner at Locanda Verde and it was amazing. There is nothing like my Sunday dinners with Erik. The first thing he said when I picked him up at the airport..."you're huge!" Some people thought that was insulting, but I couldn't be more pleased with the compliment. I'm 16 weeks and I felt the baby moving last night! Erik was excited too, but he was also half asleep. Hopefully baby Battes will do an encore performance soon.

While Erik was away it seems he really got into the groove of his new job. I get the impression that he has more value there as an employee than before. And his new company has a PR firm, Bullfrog and Baum (one of the best) that sets Erik up with all sorts of promo events. I don't know how other chefs feel about promotions. And actually I don't really know Erik feels since he hasn't done that many. On Monday, he'll be cooking with other restaurants at and Autism Speaks event in the financial district. On the 18th he'll be signing Battman's new book: Small Things Savory, at The Great Gathering of Chefs. He'll sign next to the mozzarella he made way back when at Perry St. That may be slightly weird since he's not representing Perry St anymore, but I think it will be fun and Battman even said I can come! I love these events. I hope to bump into my promo event buddy Wylie Dufresne; he is probably the nicest chef I've ever met. Oh, and Erik is taking a class from the Gohan Society: Mastering Fish the Japanese Way.

There is so much going on but it all feels right. I'm so glad to have my chef back.

I was honored to be asked by ChefWidow to guest blog on her site while she was at Disney with her family. I wrote about the fears I have of becoming a mother and all that comes with it. Check it out.
An except:
"Maybe I’m just a 26-year-old, scared-as-hell, soon-to-be mom with an individuality complex? Perhaps it’s selfishness. I do expect to be giving up my weekly dinner dates in New York with my husband-but only if I can trade them in for Sunday family meals. "
Also, check out the other guest bloggers who rocked the blog this week.
Food is Love,
Hilary
2 comments:

All Comments
Email Me