I'm watching the Today Show now, something I normally don't have an opportunity to do and I'm glad for that. But today they've got a fellow school of Jean-Georges chef on. None other than Johnny Iuzzini himself. He looks a little more Johnny Bravo these days with his supreme sideburns, but he's still one of New York's sexiest chefs. And his new cookbook "Dessert Fourplay" goes on sale today. He was generous enough to send a signed copy over to Erik but I haven't got to browse through it yet...except via webcam/iChat. I hope there are some things in there even a baking bomb like me can handle.

I haven't been as attentive to my blog as I'd like to be, but this Christmas has been a nightmare. I can't go into details; I'd like to save the integrity of my family that is what is left of any integrity. I grew up in a home that was dysfunctional. Now as a 25 year old woman I know that all families are dysfunctional. However, the pain of my childhood just won't let me grow up. I'm in Ohio and Ive got good mind to leave several days early to to home. I'll keep this post short as I'm sure it's annoying to read this with only a skeleton of the whole story. Please just keep me in your thoughts.

The Deal of the Recession

Due to a tight budget I had an opportunity to Christmas shop while practicing my favorite act: saving money. I saved so much money this year on gifts that I should really get a plaque for my hard work. I used coke rewards points to earn a magazine subscription. I took advantage of the Linens and Things going out of business sale, where Erik and I bought most of our gifts. And this isn't really a deal, but I bought some jewelry from my chefwife pal, J and felt good supporting her wallet. Plus I'm not ashamed to admit that I regift unopened, valuable gifts. Not to mention the benefits of the huge sales at the suffering department stores. But the biggest deal I got this year would have to be the $50 Amazon gift card I earned with my credit card reward points.

Any major deals this season?

I love http://www.gifts.com/ for great ideas!! I usually find their good ideas on another site for cheaper, but it's a great place to start for some inspiration.
2 comments: 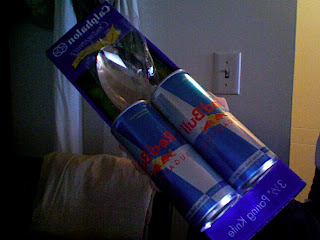 With our stale economy and the pressure of the holidays on food service workers, my generous chef decided to buy gifts for his kitchen staff. This act of kindness blew me away. My husband generally isn't this giving. Now, that may sound like an insult to you, but I certainly don't mean it that way. It's not right or wrong, but it's just the way it is. And isn't it perfect that he ended up with me because I seem to worry about everyone else and forget about myself.
Well, he bought his staff each a paring knife, a spoon, and two red bulls. This may not seem like much but I anticipate my jolly husband being well received today at work as he unpacks his red bag.
DCW_NYC
-Hilary-
2 comments:

I've been neglecting this blog but certainly not because I want to. I got a monster cough this week and nearly lost my voice. I sound scratchy and I cough roughly 759 times a day, but I feel fine now. The good thing is, I've got all my Christmas shopping done, my lesson plans for the first week in January are finished, and my students performed like rock stars at their holiday show.

Tuesday is the last day of school before break and I'm driving out to Ohio that day.

What is everyone else doing to celebrate? My chef is working of course, but that's my life and its okay that way.

Mr. Vongrichten, finally posted a blog again. He's spreading some of this prix fixe deals from Perry St's yearound deal to all his NY eateries. Hopefully this will bring some people back out to eat again this season.

Email ThisBlogThis!Share to TwitterShare to FacebookShare to Pinterest
Labels: Jean-Georges

As the year quickly rolls to an end and I reflect on the past 11.5 months I've got one thing on my mind. Will I be on the naughty or nice side of your list? Ok, so I admit I never followed through with Pilate's or the wii fit. But I have been eating more vegetables (sort of). And I guess I may have lost my cool with my husband more than a few times this year. I spit some gum on the street. I didn't always hold the elevator for my neighbors. I used fake promotional codes to get free stuff online. I re-gifted. I hit my cat once when he scratched the leather couch. I deleted forwards from friends without even opening them. I watched way too many hours of reality television. And I ate an astronomical amount of Dino nuggets.

BUT I'd also like to plead my case for that coveted spot on the nice list. I donated (and shopped at) the Goodwill. I drove carefully all year. I saved my cat's life. (The other one, not the one I hit.) I voted. I conserved energy. The fake codes I told you about were for pictures books for my students. I wore sunscreen. I flossed, a lot. I used moisturizer daily. I worked really hard at speaking with Non-Violent Communication. I went to all the PTA meetings. (so far). I teach kids!

I think the good outweighs the bad and I'd like you to consider the following gifts.

2. A new ironing board and iron.

Thanks!
Hilary Anne
No comments:

I'll admit, my last blog post was written in desperation. But after all, isn't that the name of the game?

I had an opportunity to talk with my chef and it seems things aren't as bad as I imagine. We'll work together to plan smaller meals. No biggie. But I am starting to turn into a nagging wife. I'm only 25! Perhaps being married to a chef doubles the age rate of a marriages. Young guys like our men are supposed to be go-getters and it seems they're already started to get burned out. I'll keep an eye out on things.

My chefs spends too much money on food.

Disclaimer: If you're a chef you just heard:"My chef is completely normal."

AHH! I don't know what to do anymore. All I see in the future is a home and a kid. And there is no way that we are going to be able to get those things before 2038 unless we save. Yes, we put away money each month, but sometimes I just don't think it's enough.

I'm so tired of hearing that we NEED to eat at all the new (expensive) restaurants for "research". Yea, f-ing right. And it's not only restaurants; we spend way too much money for two people at the grocery store. We shop together on Sundays and Erik makes a big meal that night that lasts for a few days. However, after the first day, Erik won't eat any. All of the sudden Tuesday rolls around and he's making a pizza, or buying gyros, or stopping at the taco truck. I don't care what we do. But at least we shouldn't be buying food times two! Fine, eat at the taco truck, but then we shouldn't be buying so much food that we end up WASTING. I hate to sounds cliche but there are people in the world who would kill for some leftovers.

In case you can't tell by my CAPITAL LETTERS, I am super annoyed and enraged right now. I never buy coffee before work, I never get food from a taco truck, and I certainly never order in like the rest of the staff does on Fridays. That too makes it hard for me to watch Erik spend money on things that we could just make at home. If he wanted tacos so bad, why didn't we just make them on Sunday night. Or, instead of making one big meal, why not make one small meal? Then at least if I'm the only one eating it-it won't go to waste. I'm pretty sure 6 quarts of chicken soup is too much for one person.

After a semi-fight over the phone last night my Sunday meals were taken away from me. Cry me a river. I may not be a fancy chef, but I can certainly make my own dinner. And I'll be looking forward to it from now on. Plus I'll be doing all the grocery shopping around here. There is no way I'm letting him ruin our finances after I've been pinching pennies for the last four years. NO WAY. 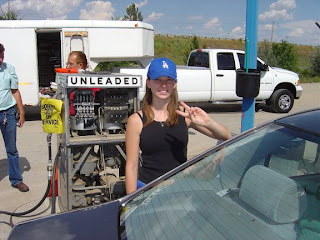 Somewhere between California and New York....Kansas I think.

It seems as though the subject of moving is quite serious and surprisingly important to chefswives. After all, the success of their careers is oftentimes dictated by the city they live in. And you know they can't live without us. I'm not sure if anyone besides me would be willing to share their feelings of resentment towards their chefs for "making them" move.

I know I suffered the first year I live in NY. I hated it here. I hated being far from my family, I hated having not a single friend AND being left alone each night that Erik was working the line. "Why did I move here?...This is all his fault....I'm miserable". Oh yeah, I had some deep resentment, and I still do. I'd like to think that if Erik's job wasn't restraining him to NYC that we'd live on a small 15 acre farm outside of Columbus, Ohio. We'd spend long weekend with my family, host wiener roasts and canoe trips. The state of my dream life, though vivid, is still a dream.

I the end, I love where we live now and I'm pleased with my decisions to move to NY with Erik. Being married to a chef comes with so many things, one of them being a one way ticket to WhereHeWantsToLive-ville.

Knowing all of the heartache I suffered the first year out here I don't think I'd change a thing. And tomorrow if Jean-Georges offered Erik a job in Europe, I'd go. In a heartbeat.

Don't forget to answer the poll on the right.
4 comments: