The Best of Firenze 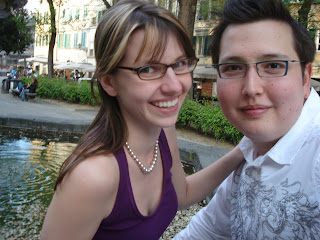 The best spot in Firenze, Italia is no where near The David, The Duomo, or the Ponte Vecchio. A true taste of Italy is located on the other side of the Arno. No, I'm not talking about the Pitti Palace either. I'm referring to the best restaurant in all of Italia! Ok, so I only ate in Venice, Florence, and Milan -(McDonald's... {twice}). Aside from the blemish of MickyD's on my food record, I think I have pretty good taste in restaurants.
Sant'Agostino23 is a small and hip in a non-hip way. The restaurant is cozy charm in a local neighborhood in Florence. We stumbled upon Sant'Agostino when were desperate for a good Italian meal. After all, everyone told us that we would eat like kings there. I was disappointed in Italy initially, but once we found Sant'Agostino I knew Italy had gems. But like all gems, they have to be hunted for and sought out.

Walking down via S. Agostino (get it?), we passed number 23. We had already poked our heads into what felt like dozens of stale looking restaurants with old sandwiches wilting in the windows. But something about 23 was different. It felt like New York. It seemed real and sincere and a little bad ass, too. There were articles from Food and Wine and other local Italian media sources posted outside. We stepped inside and BUMMER, they weren't open for another hour. But after talking with the general manager and saying hello to chef Mirko Innocenti we knew we had to come back. Erik's chef radar must have been going off because as soon as we walked out he said, "Did you see those guys? They're hard core." How could he know? Must be a chef thing. Although we were famished and suffering from gurgling bellies, we walked to a local park to pass the time taking silly pictures with a pigeons. 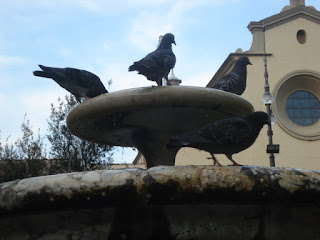 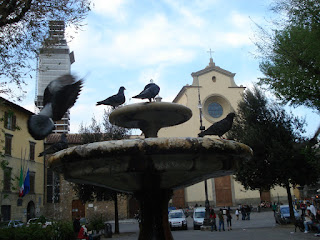 The menu at Sant'Agostino23 can be described as meaningful, direct, and approachable. I loved everything we ate. The first time we went (yes, we ate here two nights in a row) we ate in the traditional way with antipasti, primi, and secondi. I wish I could remember the specials we had, but I have a terrible food memory. I can only remember the things we ate on the menu because I asked to keep one. The second night we ate there we asked for three pastas to share. Spaghetti con bottarga di tonno, gnudi ricotta e spinaci al burro e salvia, and fagottini di pasta fresca con ricotta e cariciofi. NO questions asked, this place would fly in New York.