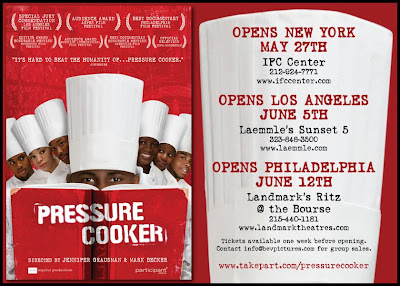 I've blogged before about being connected to a very important organization: C-CAP. (Careers through Culinary Arts Program) It's a non-profit organization that raises money to help underserved high school students enter the culinary arts field by providing scholarships, teacher training, job training, product donation, and college advising. I couldn't be happier for a program that supports the culinary arts, students, and education. I've been lucky enough to serve on the Junior Benefit committee as well as volunteer at three events now.
Jennifer Grausman, daughter of C-CAP founder Richard Grausman, is very excited to share her documentary Pressure Cooker. This touching film follows three seniors at Philadelphia’s Frankford High School, who find an unlikely champion in Culinary Arts teacher Wilma Stephenson. A legend in the school system, Mrs. Stephenson’s hilariously blunt boot-camp method is validated by years of scholarship success that’s taken countless students from the city’s working-class neighborhoods to the top culinary schools in the country. And under her fierce direction, the usual distractions of high school are swept aside as Erica, Dudley and Fatoumata prepare to achieve beyond what anyone else expects from them.

If you want to see a movie that will touch your heart and open your mind to the reality of hard work and determination, then go see Pressure Cooker. This type of film is something we don't see enough of. No high paid actors, no blockbuster budget, just real, authentic people inspiring others.

Still not convinced? The trailer alone will inspire you.
Become a fan of Pressure Cooker on Facebook like I did!
Food is Love,
Hilary

The whistle starts to sound. It is safe to open the pressure cooker. The outside should be cut out to avoid overcooking. Based on these recipes.