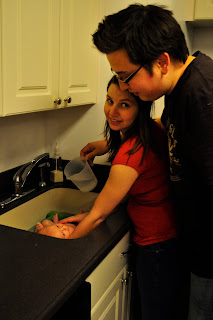 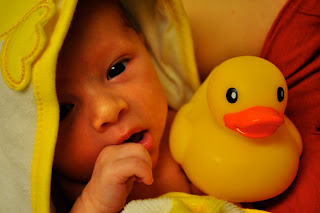 What a week! Last Friday Erik and I went to the hospital and had a beautiful, healthy baby boy! Maverik was born 6 pounds, 15 ounces, and 19 inches long. Everything went very well up until the point that Maverik was delivered. He came out great, but about 20 minutes passed before the placenta was delivered. As it turns out, I had an inverted uterus attached to the placenta and had to be rushed to the OR. I lost so much blood that I also had a blood transfusion. Needless to say, it was a crazy and terrifying night. Erik was a wreck while I was in the OR because he didn't know what was going on. My doctor was amazing-she is retiring this week and in all her career had never experienced this problem. But she studied in school and remembered what to do. If she had not acted as fast as she did I don't think I'd be typing this right now. A couple days later, I had to go back to the ER for some fluids due to complications with the transfusion. Then a day after that Maverik was taken to the NICU in an ambulance where were stayed for about 36 hours. The first week of Maverik's life we were at a doctor or hospital every day.
All of this still has not hit me. I'm trying to write about it in hopes that I might be able to get in touch with the trauma I experienced. We are home now and Erik is back to work.
I never appreciated life, family, or prayer as much as I do now.
Food is Love,
Hilary

Congrats!!! So happy to hear of birth! Focus on bebe and save the facing the heartache for later...I'm normally a big advocate of dealing with things asap, but you will need you strength and energy for the sleepless nights and general motherhood. I too, and many of my friends, have been through horrible births, almost dying, and the always happy NICU experience! I'm a 2 time NICU mom! Its awful and wouldn't wish it on anyone...but you got through it and you should rest now, feed that kid and know how lucky you are you walked away...with your baby!
Now shut that computer and sleep sleep sleep!!!
Welcome to your new club...chef wife and mother!! (you already know which I will say is harder...I wish you'd had an easier time!) Hang in there!

Oh, H., I knew there had been a complication with the birth, but I had no idea it was so intense! So, so glad to hear things have settled down so nicely and that are all healthy and happy at home. Big hugs to you all!

Congrats on the birth of your new son! You are a warrior! Although scary complicated and chaotic, the focus is your beautiful arrival. I'm sure all of the Chef wives out there are sending their love and best wishes xoxox
S

Congrats on your sweet baby boy. Sorry what you went through and what you are still going through. Your family will be in my prayers

Congratulations, Hilary! I have been checking every day to see if Maverik is here yet, and I am so glad to hear that you're both doing okay despite the many complications. I hope some of your family can come to help you out, if Erik is at work. I am surprised he did not take some time off.

Congratulations!!! What a journey!!! Only the best of wishes for you and your family. Take it easy Hilary and remember to slow down and enjoy what is going on around you. Lots of love.
PS We're gonna need photos!!! :)

Congrats to the family and welcome to the little guy! So sorry to hear that the first week was so rough for both you and baby. Glad to hear everyone is ok now. Get lots of rest, don't be afraid to ask for help and find a couple of good mama friends/family who have great listening ears and will let you talk about your experience as often as you need to. Also check in with local midwives and birthing centers in the area. They often have new mama gatherings that help you process the birth. A friend of mine also goes to a mama/baby yoga group and they share their birth stories there too. And of course, enjoy that baby and your new family!
Kristen, PDX, OR

Congratulations, Hilary & Erik! And welcome to the world, Maverik :o)
You all are so, so very blessed!!!

Congrats on your boy and on your health!

Thank you all for the well wishes! I am recovering well and getting used to those 2 AM feedings-along with the 4 and 6 AM feedings as well. I really want to get back to writing here, but I just don't have the time right now.