Forgot To Tell You

Ok, so maybe I didn't really forget. I actually battled on both opposing front lines of "I should" and "I shouldn't". But after a long bloody battle, I've decided it's really only 5% bragging, not sure what the other 95% is, but here I am sharing anyways.


Erik was honored by Zagat as one of New York City's 30 under 30. We are both so proud, especially to be recognized by such an influential company as Zagat. And yes, he's back at Jean Georges. It's really the only place he should be, too. I feel like we are home. Yes, we. Every change he makes, is a change I make. I adore Jean-Georges and Erik's other chef mentor, Greg Brainin. They both played and continue to play a vital role in my husband's career. I respect them both in every sense of the word. Along with Erik's new chef de cuisine position, we've certainly dug our roots deep here in New York- we close on our first house on Tuesday.
Food is Love,
Hilary 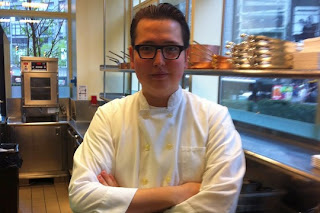 Erik Battes, 28
Chef de Cuisine, Jean Georges
-By Kathleen Squires
Jean-Georges Vongerichten had his eye on this rising star since Battes first stepped into the kitchen at Jean Georges as a 19-year-old CIA extern. Battes briefly moved on to Los Angeles to work at Water Grill under chef Michael Ciramusti, but soon found himself back at Jean Georges as a line cook. A year later, he helped openPerry St., where he was eventually promoted to chef de cuisine. But Battes felt the need to spread his wings, so he flew the JGV coop once again, this time to BLT Restaurants as a corporate chef. He couldn’t resist the lure of his mentor, however, as Battes has been recently named the chef de cuisine who will lead JGV’s flagship though its spring renovation.

Congrats, on all accomplishments!

And obviously there is that saying: "behind every great man...there's a great woman!" :D

It's the moments like this, that make being a chefwife 100% worth it! Congrats to your husband!

PS-we have a CIA extern at our restaurant right now, and this gives me great hope for the bright future he has!!

Hilary - that is SO AWESOME!!! Congratulations to you BOTH!!!

I love what you said... You're in this TOGETHER. His success is a measure of how flexible and adaptive YOU are!!! This just shows me that you both have what it takes to swerve around the unknown and always changing corners in this industry!

Hopefully you're settling in to your new home! Enjoy every moment!